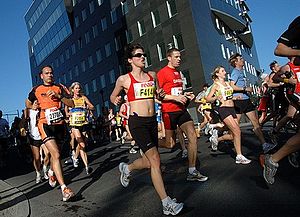 A common myth in fitness is that by doing “cardio” (cardiovascular) exercise is the best way to exercise to improve your heart function and burn fat. And by “cardio” exercise, people mean running, biking, swimming for long periods of time. Many people feel that if you can run a mile, you’re in good shape. If you can run 10 miles you’re in great shape and if you can run an entire marathon? Well,  you must be in amazing shape and your heart is super healthy. Sounds good…but it’s not true!

Recent research shows that excessive cardiovascular endurance exercise may damage your heart. Although most people do not exercise enough, it’s important to understand that you can do too much exercise- especially if you focus exclusively on traditional cardio exercise.

The study published online in the Journal of Applied Physiology, recruited men aged 26-67 who were highly trained endurance athletes. All the athletes were part of either the British or Olympic distance running or rowing team as well as member of the  100 Marathon Club (meaning that they have completed at least a hundred marathons). In short, these guys were the top tier of endurance athletes.

The researchers used a new type of magnetic resonance imaging to look for signs of fibrosis in the heart.  Fibrosis is scarring within the heart. If the fibrosis becomes sever, it can stiffening of the heart which can contribute to irregular heart function and, eventually, heart failure. The results of the study were rather disconcerting. It was found that the athletes who trained the hardest and longest showed the most fibrosis in the heart. In other words, spending more years doing endurance training such as marathons and ultra marathons was associated with a greater likelihood of heart damage according to this study. 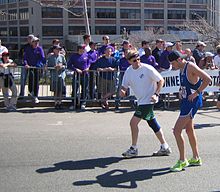 The link between heart damage and extreme endurance training issn’t a new one. It comes up every time a seemingly healthy endurance athlete drops dead from a heart attack. Marathon competitor Alberto Salazar had a heart attack when he was 48 and had no pulse for 14 minutes and Jim Fixx, who is credited for popularizing the sport of running, died from a  heart attack after his daily run at the age of 52. So the last study we looked at suggested a correlation with endurance athletes and heart damage but the study doesn’t directly prove that that one causes the other…

However, another study published in the journal Circulation provides the first solid evidence between prolonged endurance exercise and heart damage. This time, researchers used rats and had them run at an intense pace every day for 3 months (which is equivalent to 10 human years). The training was designed to simulate years of marathon training in people.

The results? The rats started off with perfectly normal hearts. At the end of the study, heart scans showed that most of the rats developed scarring and structural changes similar to what was seen in the human endurance athletes in the first study I mentioned. A control group of untrained rats showed no such changes to their hearts.

So what does this mean for you the reader? First, I hope that if you were thinking of running marathons and triathlons to get in shape, you take this study to heart (pun intended) and decide whether the risks of extreme endurance training are right for you. Second, I want you to know that there is a far better way to lose fat, get in shape and improve your health that takes less time than running every day…